Vitamin D is a steroid hormone that comes in 2 forms that differ chemically in their side chain, D2 and D3 (Figure 1). Either produced in the skin (D3) from 7-dehydrocholesterol by exposure to ultraviolet-B light or ingested with foods of plant or animal origin (D2 and D3, respectively), vitamin D is biologically inert and requires 2 hydroxylations to form its active metabolite.10 The first hydroxylation is constitutive and takes place in the liver by vitamin D-25-hydroxylase to form 25(OH)D. The second hydroxylation is catalyzed by 25(OH)D-1aOHase (CYP27B1) to form the biologically active form of vitamin D, 1,25(OH)2D (calcitriol). This latter 1a-hydroxylation of 25(OH)D takes place in most tissues and cells of the body; however, serum levels of 1,25(OH)D are determined mainly by renal 1a-hydroxylase activity. This activity is regulated by serum calcium, phosphate, parathormone, and fibroblast growth factor 23.

It is important to know that circulating 25(OH)D levels are a main determinant of extrarenal tissue levels of 1a,25(OH)2D and thus are the best indicator of whole-body vitamin D status. Actually, 25(OH)D is used for the classification of the vitamin D status as deficient or sufficient.11

The biological responses to the 1a,25(OH)2D3 hormone and its analogs are mediated by the VDR, which is a DNA-binding transcription factor. However, VDR is also localized to the plasma membrane caveolae and may result in activation of signal transduction pathways that generate rapid nongenomic responses

Vitamin D deficiency has been reported to exert negative effects on β-cell function and insulin sensitivity, whereas it may be causally related to the development of diabetes mellitus type 2.99–101

Although the exact mechanism for such a pathogenic role has not yet been fully established, it was found that the promoter region of the insulin gene contains vitamin D–responsive elements, postulating a direct regulation of its transcription by 1a,25(OH)2D3.102 Additionally, insulin secretion is a calcium-dependent process, and vitamin D is known to regulate the calcium flux and intracellular cytosolic calcium [Ca]2+i pool in the pancreatic β cell. Intriguingly, pancreatic β cell expresses 1a-hydroxylase and 24-hydroxylase, indicating a possible autocrine link between vitamin D status and pancreatic function.

In any case, both committees used skeletal health as an end point, and they both concluded that the available scientific evidence supports a causal role for vitamin D only in skeletal health but is not yet compelling that either confers benefits for or is causally related to non–skeletal health outcomes like CVD. Thus, prescribing vitamin D supplementation for the purpose of preventing CVD beyond recommended daily needs cannot be recommended.

The Endocrine Society Task Force suggests using either vitamin D2 or vitamin D3 for the prevention and treatment of vitamin D deficiency. However, there is currently a lack of clarity in the literature as to whether there is a definitive difference in the potency between D2 and D3 as modulators of bone metabolism factors, and it is more unclear whether any differences translate to different effects of these 2 forms (D2/D3) on cardiovascular risk factors.

Of interest, total 25(OH)D levels have been shown to be correlated with various adverse cardiometabolic risk factors in adolescents, whereas recently published studies aiming to compare prospective distinct associations of 25(OH)D2 and 25(OH)D3 with cardiovascular risk factors in younger ages have shown that higher 25(OH)D3 concentrations are associated with higher levels of high-density lipoprotein cholesterol in childhood and lower fasting insulin in adolescence.136,137 Moreover, 25(OH)D2 was inversely associated with apolipoprotein A1 and triglycerides and positively associated with C-reactive protein and IL-6.138

Taking into account that pharmaceutical preparations in some countries (ie, the United States) contain only vitamin D2 whereas multivitamin preparations contain either D2 or D3, the identification of possible differences is of great importance in suggesting the use of one or the other form for achieving favorable effects on cardiovascular risk factors. Details on the treatment of vitamin D deficiency in special conditions and the re-evaluation of the subjects supplemented with vitamin D are provided in the online-only Data Supplement.

Osteocalcin is the most abundant noncollagenous protein of bone matrix. Once transcribed, this protein undergoes posttranslational modifications within osteoblastic cells before its secretion, including the carboxylation of three glutamic residues in glutamic acid, which is essential for hydroxyapatite binding and deposition in the extracellular matrix of bone. Recent provocative data from experimental observations in mice showed that the circulating undercarboxylated fraction of osteocalcin increases insulin secretion and sensitivity, lowers blood glucose, and decreases visceral fat in both genders, while it enhances testosterone production by the testes in males. Moreover, both total and undercarboxylated osteocalcins increase following physical activity with potential positive effects on glucose tolerance. Despite that these evidences have been only in part confirmed in humans, further prospective investigations are needed to definitively establish the endocrine role of osteocalcin both in the general population and cohorts of patients with diabetes or other metabolic disorders. 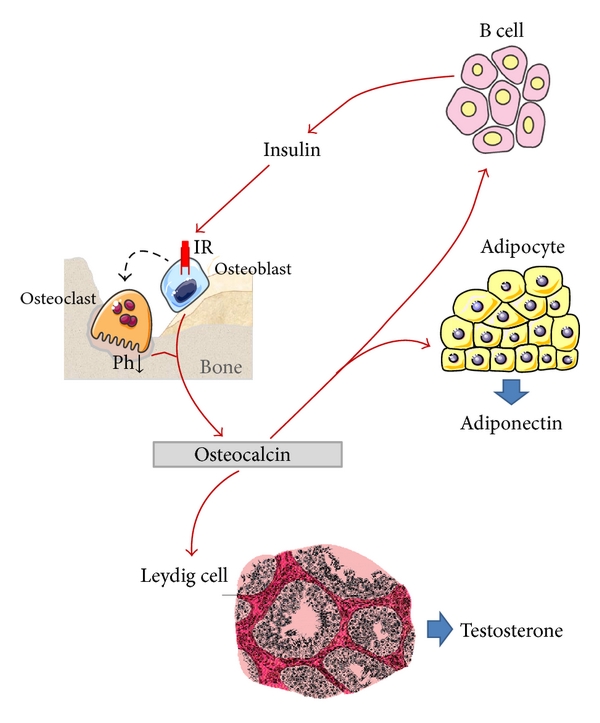 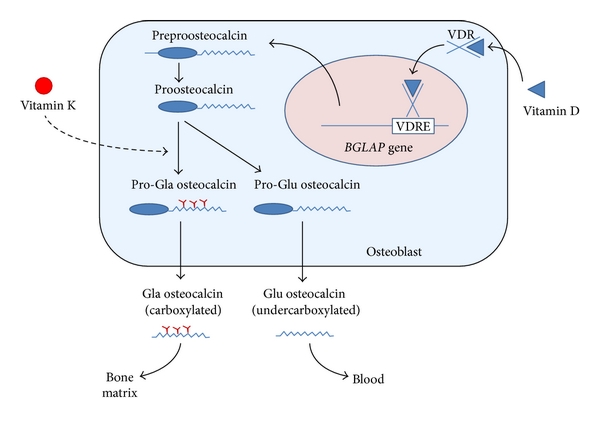 Osteocalcin synthesis in osteoblasts. The BGLAP gene encoding osteocalcin is mainly expressed in osteoblasts and to lesser extent odontoblasts. After transcription (which is stimulated by vitamin D) the preproosteocalcin peptide undergoes proteolysis giving rise to a prepeptide (23 aa) and a proosteocalcin peptide (75 aa). The latter can be carboxylated at Glu residues 17, 21, and 24, resulting in formation of Gla residues in a vitamin K dependent process. Generally, this process only occurs in a proportion of newly synthesized pro-osteocalcin. Then Gla and Glu pro-osteocalcin peptides are subjected to a final proteolytic process that produces, respectively, carboxylated and undercarboxylated osteocalcins. Both forms are released from osteoblasts in a process which is calciumdependent. While the carboxylated Glaresidues are involved in calcium and hydroxyapatite binding, allowing osteocalcin deposition on mineralized bone matrix, undercarboxylated osteocalcin has a low affinity for hydroxyapatite and is more easily released into the circulation.

Epigenetic Regulation of Bone Remodeling and Its Impacts in Osteoporosis 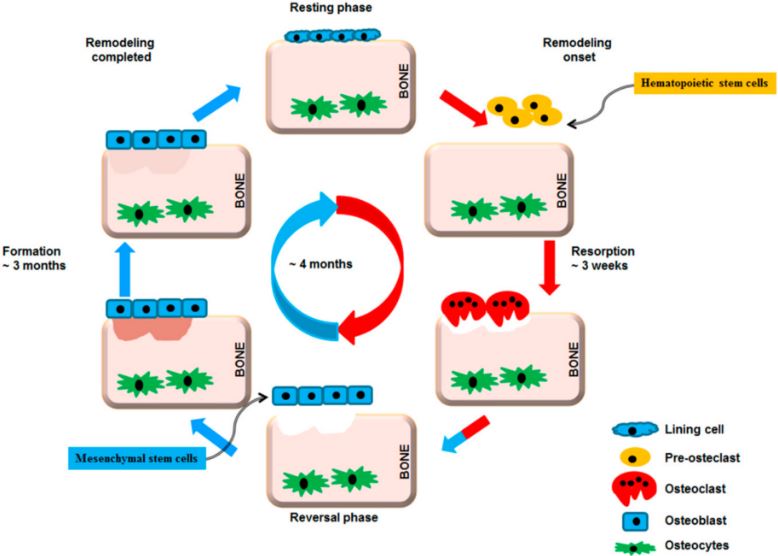 Osteoporosis is a major public health problem affecting the elderly population, particularly women. The objective of the study was to evaluate the effects of adding weight-bearing exercise as opposed to nonweight-bearing programs to the medical treatment of bone mineral density (BMD) and health-related quality of life (HRQoL) of elderly patients with osteoporosis.

Participating in the study were 40 elderly osteoporotic patients (27 females and 13 males), with ages ranging from 60 to 67 years, who were receiving medical treatment for osteoporosis. They were assigned randomly into two groups: Group-I: Twenty patients practiced weight-bearing exercises. Group-II: Twenty patients did nonweight-bearing exercises. All patients trained for 45-60 min/session, two sessions/week for 6 months. BMD of the lumbar spine, right neck of femur, and right distal radial head of all patients were measured by dual-energy X-ray absorptiometry before and after both treatment programs. In addition, the QoL was measured by means of the HRQoL “ECOS-16” questionnaire. 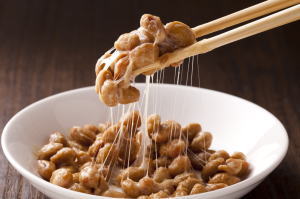 Optimizing bone health isn’t as simple as getting enough dietary calcium. Beyond the obvious importance of this mineral, other factors, such as vitamin D and magnesium intake, low-grade systemic inflammation, weight-bearing exercise, and intestinal health, also impact bone mineral density, and vitamin K2 should be added to the list.

This fat-soluble vitamin is required to activate osteocalcin, an important protein secreted by osteoblasts, the body’s bone-building cells. When vitamin K2 is activated, osteocalcin can draw calcium into the bones where osteoblasts then incorporate it into the bone matrix.2 In addition, vitamin K2, when combined with vitamin D3, helps inhibit osteoclasts, the cells responsible for bone resorption.3

According to a recent study, the incidence of hip fractures in Japanese women seemed to be strongly influenced by their vitamin K2 intake. In Tokyo, the regular consumption of natto, a fermented soy food high in vitamin K2, is associated with a significantly lower risk of hip fractures compared with western Japan where natto isn’t frequently eaten.1 Studies examining the influence of vitamin D and vitamin K (including K1 and K2) intake in institutionalized elderly patients compared with home-dwellers also showed that a higher intake of these nutrients reduced bone fractures.1

Since 1995, high doses of vitamin K2 supplements have become an approved treatment for osteoporosis in Japan where studies support its benefit in the prevention of further decline in bone mineral density. Some women have experienced an increase in bone mass as a result of this intervention.1 Although these results are promising, more studies are needed to confirm their applicability to other populations.