NAD and the aging process: Role in life, death and everything in between

•Cellular NAD levels decrease during the process of chronological aging.

•The enzyme CD38 is the main NADase in tissues and plays a key role on the age-related NAD decline.

Life as we know it cannot exist without the nucleotide nicotinamide adenine dinucleotide (NAD). From the simplest organism, such as bacteria, to the most complex multicellular organisms, NAD is a key cellular component. NAD is extremely abundant in most living cells and has traditionally been described to be a cofactor in electron transfer during oxidation-reduction reactions. In addition to participating in these reactions, NAD has also been shown to play a key role in cell signaling, regulating several pathways from intracellular calcium transients to the epigenetic status of chromatin. Thus, NAD is a molecule that provides an important link between signaling and metabolism, and serves as a key molecule in cellular metabolic sensoring pathways. Importantly, it has now been clearly demonstrated that cellular NAD levels decline during chronological aging. This decline appears to play a crucial role in the development of metabolic dysfunction and age-related diseases. In this review we will discuss the molecular mechanisms responsible for the decrease in NAD levels during aging. Since other reviews on this subject have been recently published, we will concentrate on presenting a critical appraisal of the current status of the literature and will highlight some controversial topics in the field. In particular, we will discuss the potential role of the NADase CD38 as a driver of age-related NAD decline. 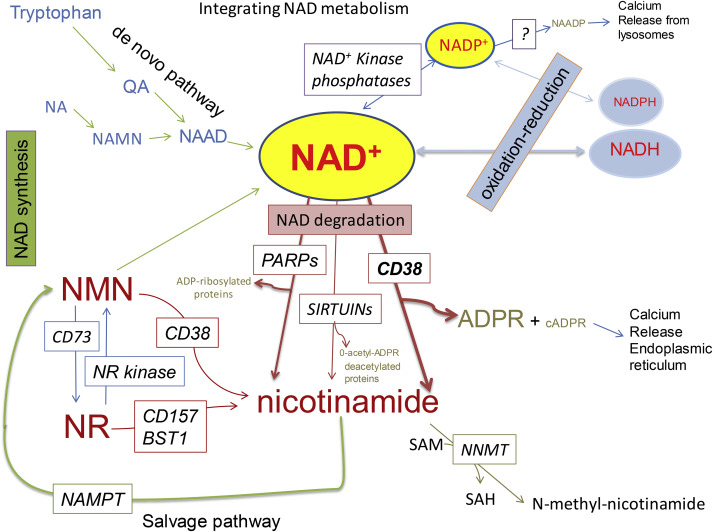