Perhaps the most important uses of fructose in metabolism, though, are in the synthesis of amino acids for DNA synthesis. The authors note:

The nonoxidative pentose phosphate pathway (PPP), which allows six-carbon glucose conversion to five-carbon ribose for DNA or RNA synthesis, is of utmost importance for the proliferation process and produces >85% of the ribose recovered from tumor nucleic acids (2). The nonoxidative PPP, controlled by transketolase (TK) enzyme reactions, is encoded by three human TK genes: TKT, TKTL1, and TKTL2 (3, 4). Clinically, patients with extensive cancer burden have a tendency to develop thiamine depletion, which is a cofactor for TK-mediated reactions, emphasizing the importance of the nonoxidative PPP for tumor growth.

The authors also cite two prospective studies that found an increased relative risk of pancreatic cancer associated with the consumption of fructose, although I must admit that I’m not all that impressed with them. For one thing, one study showed fairly weak associations (relative risk less than 2.0, with one of the trends not being statistically significant and another being barely significant). The second study was only slighly more convincing. In any case, let’s just say that the evidence linking fructose intake to pancreatic cancer, while somewhat suggestive, is by no means bulletproof, and it’s not clear that either of these studies adequately controlled for confounding factors. I’d say it’s probably worth looking into.

So look into it the Heany’s group did. The first finding was one that didn’t particularly surprise me, namely that pancreatic cancer cells could use fructose as a substrate and grow just as fast as they could in glucose. They used multiple assays to measure proliferation and found that fructose and glucose produced the same rate of proliferation. Finally, they tested cells isolated from freshly resected human pancreatic cancer specimens and found…the same thing! Basically, they showed that, although glucose is the preferred fuel for pancreatic tumor growth, fructose could serve just as well.

Next, Heaney’s team did a bunch of metabolomic studies, looking at the products of glucose and fructose metabolism in order to determine. Basically, they incubated cancer cells in medium containing either glucose or fructose labeled with the isotope of carbon, 13C, which allowed them to track the products of metabolism using mass spectroscopy. What they found was that, although glucose and fructose can share the same metabolic pathway after fructose 6-phosphate, in the cell glucose and fructose are metabolized differently. Glucose, not unexpectedly, was used mostly for glycolysis. Compared to glucose, fructose induces is preferentially metabolized via the nonoxidative pentose phosphate pathway to synthesize nucleic acids and increase uric acid production. What this means is that fructose provides the raw materials for cancer cells to make more DNA, which cells must do in order to divide and proliferate. The differences are summarized in the following chart:

Panel A represents glucose metabolism and the relative proportions of each metabolic process glucose is shunted to, while panel B shows fructose. Compared to glucose, fructose enters the nonoxidative pentose phosphate shunt and is used to synthesize nucleic acids. 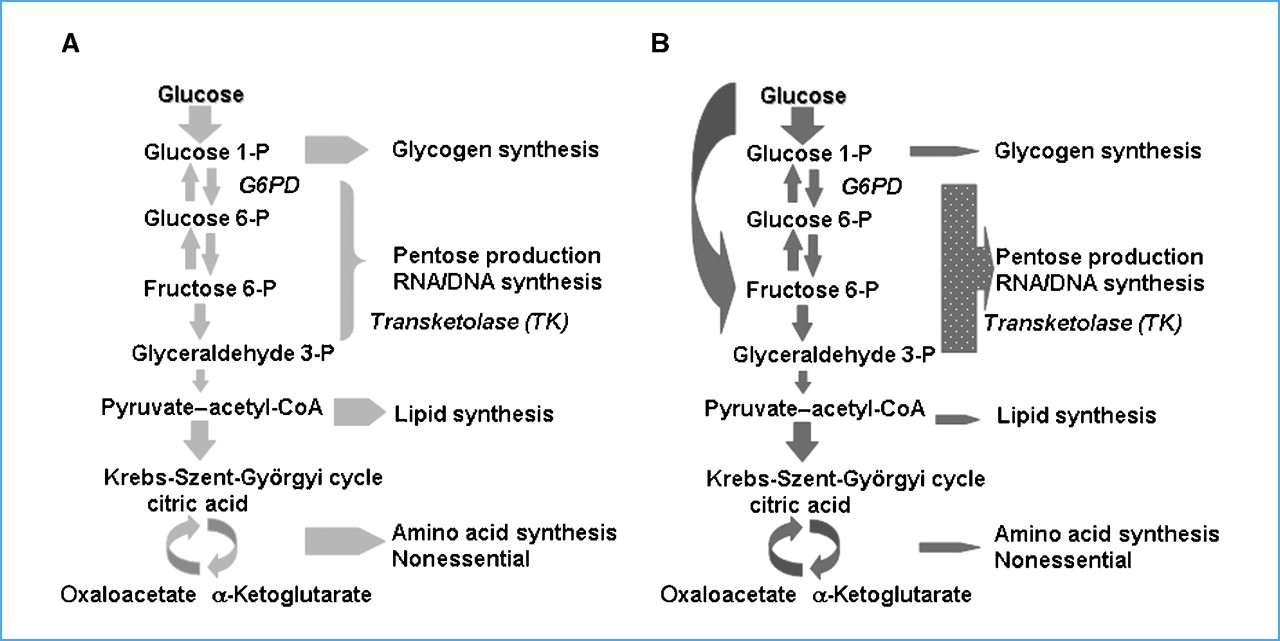 It’s well known that cancer cells suck up and metabolize glucose far more avidly than normal cells. The reason is that cancer cells, even when there is oxygen present, still tend to use anaerobic metabolism, which produces far less energy per molecule of glucose and thus requiring a lot more glucose. This behavior is known as the Warburg effect and was first described by Otto Warburg in 1928. That’s the basis for a drug that I’ve written about pretty extensively over the last couple of years, namely dichloroacetate, which selectively targets the Warburg effect. Heaney’s results are potentially important in that they suggest that not just aberrant glucose metabolism but aberrant fructose metabolism might be involved in the pathogenesis of pancreatic cancer. Whether diet contributes to these changes or not is an open question. Unfortunately, Heaney takes his potentially important results, and yokes them to a policy using far stronger terms than are justified:

“The bottom line is the modern diet contains a lot of refined sugar including fructose and it’s a hidden danger implicated in a lot of modern diseases, such as obesity, diabetes and fatty liver,” said Heaney, who also serves as director of the Pituitary Tumor and Neuroendocrine Program at UCLA. “In this study, we show that cancers can use fructose just as readily as glucose to fuel their growth.”

Scientists surprised to find that amino acids, not sugar, supply most building blocks for tumor cells

The Metabolism of Cell Growth and Proliferation