The core of essentially all biological membranes is the phospholipid bilayer. This is a double layer of phospholipid molecules arranged in a continuous and freely movable (fluid) manner. One of the main differences between organisms will be the lipid composition of the bilayer.

This is one of the most important distinguishing features of different membranes. The most common membrane lipids are phospholipids, so called because they contain a phosphate-based head group connected to one or more long-chained carboxylic acids, called fatty acids (see below). The nature of these groups means that, when in an aqueous environment (e.g. anywhere a cell is likely to be), the hydrophilic phosphate head group and hydrophobic acyl-chain will spontaneously arrange into a bilayer structure (see below, right).

Above: on the left is an example phospholipid with a commonly found head group, choline. Phospholipids from this class are known as ‘phosphatidylcholines’, with the example here being 1-Palmitoyl-2-Oleoyl-glycero-3-PhosphoCholine (POPC). On the right is an illustration showing how these molecules pack into a bilayer.

There are a number of different phospholipid classes, defined primarily on their head groups (blue in above image), and further differentiated by their fatty acid tails. The major types of head group are:

In addition to these major types of phospholipid, there are others which are better characterised by other features:

Glycolipids, which contain a carbohydrate (mono-, di- or poly-saccharide) group on the lipid head
Sphingolipids, which have a sphingosine group, thereby a nitrogen at the top of their acyl chain.

Both of these can be phospholipids, if they have phosphate in their head group, but are more-generally known for their other properties.

Finally, there are sterols, which are never phospholipids but play an important role in a variety of membranes. An important example is Cholesterol.

This is a lot of detail, and at the same time quite a generalisation, but it is important to give a vague overview of the many types of membrane lipid.

So, as you might expect the cell membrane composition varies massively between different organism, and between different cell types in multi-cellular organisms. For an idea, here are a few examples of well-characterised lipid membranes:

To summarise some of the main points, PC is the most predominant lipid in many multi-cellular eukaryotic cells, but the amounts of some other lipids can vary considerably, with cholesterol (Ch) being a very good case. In converse, PC is completely absent from bacterial cells, with PE and PG far more prevalent. In addition, some lipids are only present in certain organisms, such as PG and CL in bacteria, and PI, Sph Ch in eukaryotes.

What’s more, some species of bacteria (such as the thermophile Thermotoga maritima) have a completely different lipid composition [5], suited to its extreme living conditions. Archaea have more unusual lipid composition yet, with their phospholipids comprising polyisoprenyl groups instead of fatty acids [5b]. In addition to this the lipids often form a monolayer of bipolar phospholipids [5c] and exhibit the opposite sterochemistry to eubacteria! [6]

This breakdown only considers the variety in the lipid head groups – when you look at the variability of the acyl chains the differences become even more striking, but that’s probably enough detail for this answer, and lipid acyl chains is much less well-defined than lipid head groups.

There are many different types of membrane protein, the main ones of which are shown below: 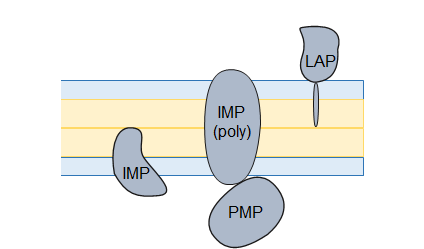 These can all vary between different organisms. For example, IMPs in unicellular organisms are more likely to have between 6 and 12 transmembrane segments, whereas in multicellular organisms 7 transmembrane segments is more common [7]. Also, most membranes strongly favour alpha-helical proteins but there are some (e.g. gram-negative bacteria outer membranes) that favour beta-barrels.

This also varies between organisms. As described above, all cells contain a phospholipid bilayer as their core. This is often supplemented with another feature to provide rigidity, the most common being the Cell wall, a tough barrier which surrounds a cell and acts as a filtering mechanism.

In plants, the cell wall is made of cellulose along with other polysaccharides, attached to a rigid pectin layer called the Middle lamella
In fungi, the cell wall is composed of chitin, and decorated with glucose-polymers and mannoproteins.
In other eukaryotic cells, the cell wall is much less common and, where found, is generally much smaller. This is mainly as the presence of a much more robust cytoskeleton makes the support of the cell wall much less of a requirement.
Gram-positive bacteria have a cell wall consisting of a thick layer of peptidoglycan and teichoic acids.
Gram-negative bacteria are unusual in that they have two membranes with a much thinner cell wall
Algae and slime moulds have different cell walls yet again

I’ve chosen two of these to compare, gram-positive and gram-negative bacteria (which need a lower-case ‘g’).

On the left is the gram-negative cell wall. This has both an inner (IM) and outer (OM) membrane, separated by a periplasmic space (PM). The PG contains a thin layer of peptidoglycan (PG), a polymer formed from sugars and amino acids. The PG is tethered into the OM by lipoproteins (LP). The OM is studded with outer membrane proteins (OMP) and surface proteins (SP), and decorated with lipopolysaccharide (LPS).

On the right is a gram-positive cell wall. This has a much thicker PG later, supported by teichoic acid (TA) and tethered into the membrane with lipoteichoic acid (LA).

The point is, even between organisms which are reasonably similar, the differences in the cell wall structure is fairly striking.