Washington State University scientists have shown that berries, grapes and other fruits convert excess white fat into calorie-burning beige fat, providing new strategies for the prevention and treatment of obesity. In the study, mice were fed a high fat diet. Those receiving resveratrol in amounts equivalent to 12 ounces of fruit per day for humans gained about 40 percent less weight than control mice. Resveratrol is a polyphenol, a type of antioxidant found in most fruits.

Previous studies have suggested that resveratrol can help prevent obesity but how it did that was unclear. Most of the research, including highly publicized studies on wine, used very large concentrations of resveratrol – much more than a human could consume in a normal diet.

“Polyphenols in fruit, including resveratrol, increase gene expression that enhances the oxidation of dietary fats so the body won’t be overloaded,” said Du. “They convert white fat into beige fat that burns lipids off as heat – helping to keep the body in balance and prevent obesity and metabolic dysfunction.” 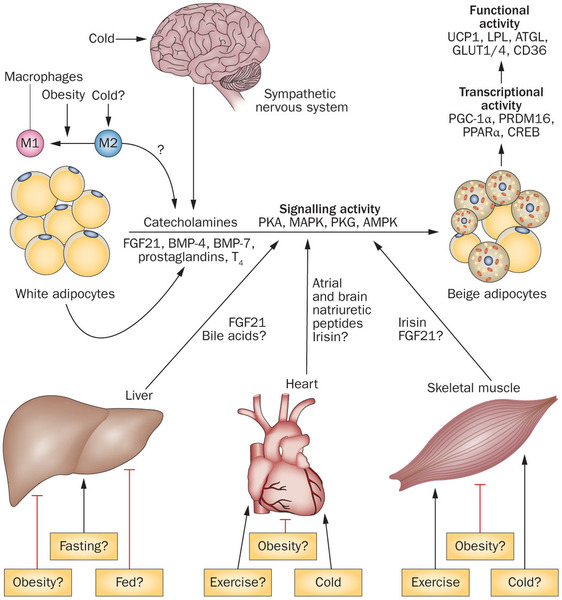 The researchers also showed that an enzyme called AMPK, which regulates the body’s energy metabolism, stimulates this transition of white fat into beige fat.

The study was recently published in the International Journal of Obesity. It was funded by the National Institutes of Health, the National Natural Science Foundation of China and an Emerging Research Issues Internal Competitive Grant from the WSU College of Agriculture, Human and Natural Resource Sciences. None of the funders had a role in the interpretation of the results.

Resveratrol has been lauded as a natural way to slow aging and fight cancer, heart disease, Alzheimer’s disease, obesity and diabetes. But many of the claims are still under debate.

Du said resveratrol is only one of the polyphenolic compounds found in fruit that provides beneficial health effects.

“We are using resveratrol as a representative for all of the polyphenols,” he said.
“We are still using it as a pure compound to be consistent with the study that came out 20 years ago in the medical journal, The Lancet, showing that resveratrol in wine has beneficial effects.

“In reality, it’s the total polyphenolic content that is more important,” he said. “We think you can increase your total intake of polyphenol compounds by directly increasing fruit consumption.”

Du said those compounds are found in all fruits but are especially rich in blueberries, strawberries, raspberries, grapes and apples. Twelve ounces is about two or three servings per day.

Wines like merlot or cabernet sauvignon, in contrast, contain only a fraction of resveratrol and other phenolic compounds found in grapes, he said.

“Many of the beneficial polyphenols are insoluble and get filtered out during the wine production process,” he said.

For consumers who want to add fiber and these bioactive compounds to their diet, it’s much better to eat the whole fruit, he said.

Researchers had always assumed there were only two types of fat, said Du – white fat where lipids are stored as energy and brown fat that burns lipids to produce heat.

Several years ago, scientists discovered beige fat, which is in between white and brown fat. Du said beige fat is generated from white fat in a process called “browning.”

“Resveratrol can enhance this conversion of white fat to beige fat and, when you have high rates of browning, it can partially prevent obesity,” he said.

In the study, adult female mice were fed a high-fat diet. Those supplemented with resveratrol were 40 percent less likely to develop diet-induced obesity compared to control mice that gained weight.

Du said white fat is protective when it’s healthy. But too much leads to imbalance and disease.

“The current theory is that when we eat excessively, the extra lipids are stored in white fat. With obesity, the fat cells enlarge to a point where they’re saturated and can’t uptake more lipids,” he said. “As the fat cells become overloaded and die, they release toxins and cause inflammation leading to health problems like insulin resistance and diabetes.

“Polyphenols like resveratrol are good as they enhance the oxidation of fat so it won’t be overloaded. The excess is burned off as heat,” he said.