In partnership with the Unrepresented Nations and Peoples Organization (UNPO), we’d love to share this simple, tasty yet unique recipe: Tsampa, a typical Tibetan dish.

The people of Tibet are collectively referred to as ‘Tsampa-eaters’ (po mi tsamsey) for virtually every meal is accompanied by the dish; and, whilst they may speak distinct languages and inhabit different regions, they all share in common the making of Tsampa. Essentially, the dish is just roasted barley flour with Tibetan butter-tea (or water) – also known as Po Cha, made from tea-leaves, butter and salt – which are mixed in a simple bowl. Tibetans usually stir the ingredients with the left hand and squeeze the mixture with the right, resulting in delicious sweet or salty dough to be fried and eaten as a side-dish. 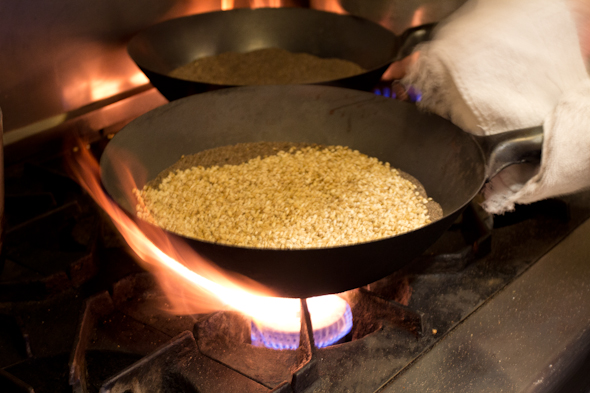 How to prepare this delicious traditional dish:
* Place the barley in a bowl, fill it with cold water and let it soak for a day (12-24h);
* Drain the barley well and let it sit for about 10 minutes;
* Heat a large cast-iron skillet at medium-heat, then place a couple handfuls of barley into it (make sure you stir well with a wooden spoon to keep the barley from
sticking to the skillet);
* Once the barleys are somewhat roasted, turn off the heat and spread them to cool onto a flat surface covered with clean cloth;
* Boil water or heat some butter-tea, then pour it into a (rice) bowl;
* Add butter to the bowl and stir until it becomes an oily mixture, then add barley flour and stir with your hands till a dough-like mixture is formed;
* Add sugar for a sweet recipe or salt and cheese to make it savory, but keep
kneading till the dough is firm and no longer sticky;
* Keep adding water or butter-tea, flour and butter to taste;
* Shape as you wish;
* Fry or eat as it is.

This easy recipe has been successfully passed on from generation to generation, it is a piece of Tibetan history and culture. Due to extremely high altitudes and harsh climates in Tibet, Tsampa is considered an important dish for travellers, not only for its nutritional benefits, but also for the energy-booster it provides seeing as roasted barley is easily absorbed by the body.

This recipe is adapted from UNPO’s Cookbook entitled “Native Delights”. The book is a collection of 19 easy to make recipes from unrecognized nations, minorities and indigenous peoples around the world. For more information, please refer to this page.

Born and raised in Säo Paulo, Brazil, where she completed two Bachelor degrees in Law and International Relations, Layse moved to the Netherlands in 2011. Upon completing her Masters in Conflict Resolution and Governance, she took a position at UNPO, where she currently works, dealing mainly with minority rights issues.  Upon residing in different cities around the world, she hopes to continue to travel and work with unprivileged groups throughout her career. A former editor at a youth empowerment magazine, Layse enjoys writing and remains actively involved in a few causes, including recognition of states, human rights and conflict transformation.

Gratitude to Ian Riley for the Tsampa picture.

His­tory of the Glad­i­a­tor Diet