Macrophages have been extensively implicated in the development of several tissues, as well as in homeostasis and cancer [85],[94]–[96]. They have been directly implicated in the regulation of other adult SC niches such as the hematopoietic SCs [97],[98], mammary SCs [99], and liver [55]. However, macrophage functions have specific roles depending on the tissue context [94]. Hence, dissecting the roles of skin-resident macrophages in homeostatic HF regenerative conditions adds a new relevant facet of skin biology. It is an important first step in understanding the functions of macrophages in other contexts such as skin repair, skin inflammatory diseases, and cancer.

In skin repair, it has been recently documented that macrophages play differential roles as wounds heal [47]. Interestingly, their infiltration upon wounding is required for HF growth [100]. It is well-established that HF-SCs transiently contribute to the epidermal lineage after injury to support cutaneous wound healing [17],[101]–[103], and that large full thickness wounds induce HF neogenesis [4],[101]. Hence, future research should target the involvement of different skin epithelial progenitor cells, macrophages, and macrophage derived Wnts in these contexts. In addition, since adult skin HF-SCs, their immediate progeny, and basal progenitor cells have been identified as cells of origin of skin carcinomas [104],[105], the elucidation of HF-SC interactions with macrophage-derived Wnts in the context of tumorigenesis [85],[106] is an important question for future studies. 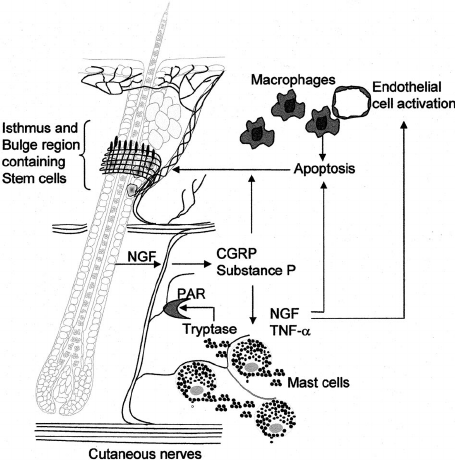 Our study delineates that macrophage-derived Wnts activate HF-SCs and HF entry into anagen. In addition, our results raise the possibility that non-apoptotic perifollicular macrophages operate as an “immunocyte brake” on HF-SC activation, which is only released by the macrophage apoptosis-associated release of Wnts. This finding begs the next question to be addressed in subsequent studies: What triggers and regulates perifollicular macrophage apoptosis during telogen? For example, does this numeric decline only reflect the natural completion of the finite macrophage life span, or does the HF epithelium (including its SCs) actively participate in the reduction of macrophages? Overall, we surmise that the outcome of HF-SC activation via macroenviromental signals is regulated by a whole host of tightly regulated signaling loops between HF-SCs, adipocytes, immune cells, the vasculature, and now, based on our findings, with macrophages.

Determining whether these molecular signals are orchestrated along with the intrinsic HF-SC regulatory cues will be valuable to define the multiple hierarchies that underlie HF regeneration. Once powerful tools of molecular biology at hand in mice become applicable to human hair research, including novel in situ-imaging tools to assess HF-SC activation in humans [107], new translationally and therapeutically relevant insights into the macrophage-epithelial SC connection and its role in tissue remodeling, organ repair, and hair diseases may be achievable.

IGF-1 is commonly known to help build muscle or something to avoid when dealing with cancer. However,