Comparative effects of traditional processing methods such as germination, roasting and germination followed by roasting on nutritional composition and reduction of antinutritional factors in red peanuts (Arachis hypogea) and small red kidney beans (Phaseolus vulgaris) were studied. The seeds were germinated at 28-30°C in the dark for 96 h for peanuts, 72 h for beans and roasted at 140°C for 20 min. Raw and processed peanuts showed the highest levels of energy, fat and proteins, while beans showed the highest levels of antinutritional factors such as phytates, condensed tannins, trypsm. and a-amylase inhibitors. Dehullm. g caused a significant in. crease (p<0.05) in energy and protein and totally eliminated condensed tannins in both legumes. The combination of germination and roasting was the best method in reducing antinutritional factors in both legumes when compared to germination and roasting.

Legume seeds such as small red peanuts and red kidney beans are good sources of proteins, complex carbohydrates and some minerals. Additionally, peanuts are a good source of energy due to their high content of fat, close to 50%[h]. However, peanuts and red kidney beans contain some antinutritional factors such as phytates, condensed tannins, trypsin and a-amylase inhibitors, that may limit it their usage and nutritional value.

Traditional processing methods such as germination and roasting could effectively improve the nutritional value of legume seeds. Alonso et al reported an increase in protein content and a decrease in. phytic acid level, condensed tannins, trypsin and a-amylase inhibitors, after 72 h germination of kidney beans in an aired and dark incubator at 25°C. A decrease in trypsin inhibitors in traditional germinated beans and in germinated and boiled black beans has been reported in previous studies, but traditional processing methods did not affect iron, zinc and calcium contents. In peanuts, some authors have reported changes on the chemical composition and lipid content as a result of roasting and germination, but information on the effect of traditional processing on peanuts remain’ s scarce.

The aim of this study was first to in. vestigate the efficiency of processing methods on nutritional composition, mineral and vitamin changes and on the reduction or elimination of antinutritional factors in peanuts and beans and secondly to investigate processing methods for an optimal nutritional quality of end products. An emphasis has been placed on identifying the most effective methods to reduce antinutritional factors in. peanuts and beans at a domestic level. 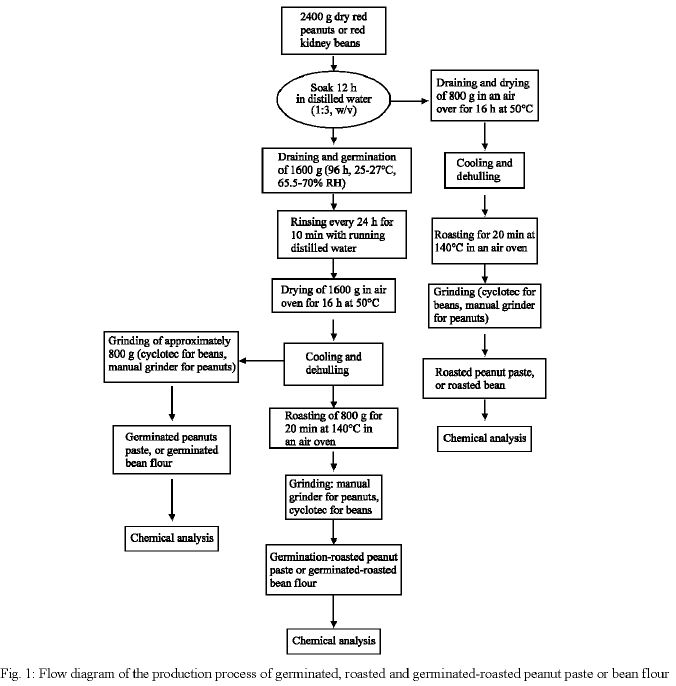 Iron, zinc and calcium content were significantly affected by germination, roasting and germination-roasting of beans (Table 2). It could be assumed that the changes were mainly due to dehulling, with calcium showing the most important decrease. Calcium was not measured in dehulled raw beans due to the accidental loss of samples, but Siddhuraju et al reported a drastic decrease of 56, 44 and 56% of calcium levels in dehulled white variety of Marthandam, white variety of salem and black variety of marthandam germplasms, respectively compared to raw seeds. Singh et al.” also reported a considerable reduction of calcium during dehulling of chickpea cotyledons. 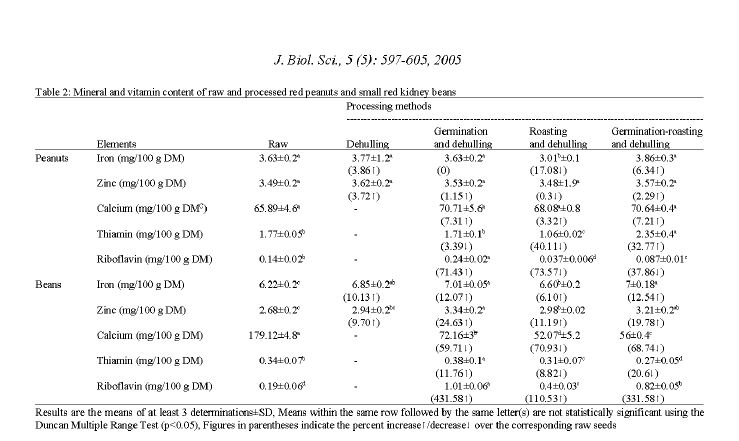 Table 2 shows a significant increase in riboflavin after germination of peanuts (71%) and a decrease occurred after roasting (74 and 38% for roasting and germination-roasting, respectively), compared to raw peanuts. Riboflavin in peanuts was partly destroyed by roasting. Heat processing may have destroyed some of the riboflavin in beans as well.

Riboflavin showed a drastic significant increase of 432% with germination of beans, compared to the raw seeds (Table 2), probably due to dehulling and 12 h steeping of the seeds in water before germination. Thiamin and riboflavin in dehulled raw beans and peanuts were not measured.

Riboflavin in peanuts has been seen to be more heat-labile than riboflavin in beans, probably due to the differences in the structure and the physiology of the seeds. The activity of enzymes involved in the synthesis of riboflavin during germination and seed coat weight could also affect riboflavin in both seeds. The present study showed that germination involves a number of complex chemical changes(“1, which could affect the chemical composition of peanuts and beans in many ways. The effect of germination and roasting on the nutritional value of peanuts and beans needs more investigation. 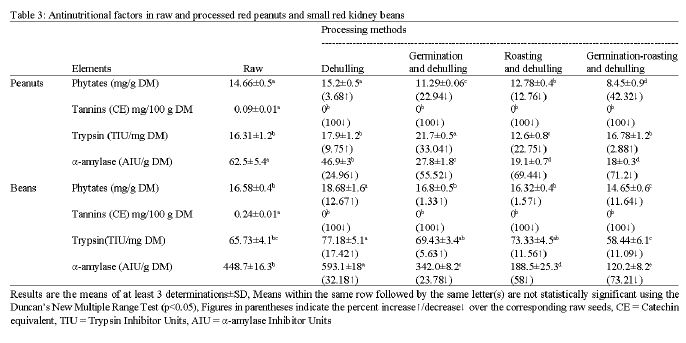 When comparing raw seeds, peanuts had the highest energy value, crude protein and fat. Some minerals, especially calcium were probably lost by dehulling, but could also be more bioavailable due to the reduction of antinutritional factors. Calcium was severely lost in beans, but dehulling could remove all condensed tannins. The use of whole beans should be investigated by increasing the steeping period prior to processing, in order to eliminate condensed tannins by leaching in steeping water, to reduce the loss of calcium. Dehulling before roasting and after germination significantly increased phytates, trypsin and a-amylase inhibitors concentration in beans but had proven to be a beneficial step to be incorporated in the processing methods used in the present study, because it eliminated condensed tannins, increased energy value and protein level, in both peanuts and beans and fat content in beans. The combination of germination and roasting was the most effective processing method in reducing antinutritional components in both peanuts and beans, except for trypsin inhibitors in peanuts. There were some similarities in the effect of processing on peanuts and beans in view of the elements assessed, but antinutritional factors levels remained higher in processed red kidney beans, making them apparently less advantageous than processed peanuts. However since moist heat is more effective in reducing digestive enzyme inhibitors than dry heat, it is assumed that wet cooking will effectively inactivate trypsin and a-amylase inhibitors, although the present study did not investigate this aspect.

Native South Africans have the lowest CRC rates .  Their diet is rich in fermented,