The ability of animals to survive food deprivation is an adaptive response accompanied by the atrophy of many tissues and organs to minimize energy expenditure. This atrophy and its reversal following the return to a normal diet involve stem-cell-based regeneration in the hematopoietic and nervous systems . However, whether prolonged fasting and refeeding can also cause pancreatic regeneration and/or cellular reprogramming leading to functional lineage development is unknown. β cells residing in pancreatic islets are among the most sensitive to nutrient availability. Whereas type 1 and type 2 diabetes (T1D and T2D) are characterized by β-cell dedifferentiation and trans-differentiation , β-cell reprogramming, proliferation and/or stepwise re-differentiation from pluripotent cells are proposed as therapeutic interventions , suggesting that lineage conversion is critical in both diabetes pathogenesis and therapy .

Although dietary intervention with the potential to ameliorate insulin resistance and type II diabetes has been studied extensively for decades, whether this has the potential to promote a lineage-reprogramming reminiscent of that achieved by iPSCs-based engineering remains unknown. We previously showed that cycles of prolonged fasting (2–3 days) can protect mice and humans from toxicity associated with chemotherapy and can promote hematopoietic stem-cell-dependent regeneration . In consideration of the challenges and side effects associated with prolonged fasting in humans, we developed a low-calorie, low-protein and low-carbohydrate but high-fat 4-day fasting mimicking diet (FMD) that causes changes in the levels of specific growth factors, glucose, and ketone bodies similar to those caused by water-only fasting. Here, we examine whether cycles of the FMD are able to promote the generation of insulin-producing β cells and investigate the mechanisms responsible for these effects.

Cycles of a FMD Rescue Mice from Late-Stage T2D

As a consequence of insulin resistance, the decrease in the number of functional insulin-producing β cells contributes to the pathophysiology of T2D by eventually leading to insulin deficiency. Previously, we showed that a 4-day fasting mimicking diet (FMD) could induce metabolic changes similar to those caused by prolonged fasting and could reduce insulin and glucose levels while increasing ketone bodies and igfbp1. Although the role of periodic fasting and fasting mimicking diets on insulin secretion is unknown, the effects of intermittent fasting and chronic calorie restrictions (CR) on insulin sensitivity have been previously reported. Here, our focus is on the putative effects of the FMD in promoting β-cell regeneration, although we have also investigated the effects of the FMD on insulin resistance.

Given that β cells replicate at an extremely low rate in the adult pancreas and that β-cell neogenesis occurs rarely, depletion of β cells and the consequent loss of insulin secretion during late-stage diabetes have often been considered conditions whose reversals require islet and stem cell transplantation.

In both mouse and humans, Ngn3 expression occurs right before and during endocrine cell generation. Ngn3 mRNA expression in the developing mouse pancreas peaks around E15.5, which is roughly equivalent to week 7–8 (Carnegie stages 21–22) in human development. Expression of Ngn3 in adult mouse islets, although rare, has been demonstrated by rigorous lineage reporter analysis (Wang et al., 2009). In agreement with results from others, our data (Figures 5 and S5) indicate that Ngn3+ cells in adult pancreas islets are important for β-cell regeneration in mice. On the other hand, the role of Ngn3 in human islet development and β-cell regeneration in adulthood remains poorly understood (McKnight et al., 2010).

To investigate how the fasting mimicking conditions affect Ngn3 expression and β-cell function in human pancreatic cells, we performed ex vivo experiments using primary human pancreatic islets (Figure 6A). Briefly, the pancreatic islets from healthy and T1D subjects (HI and T1DI, respectively) were cultured according to the manufacturer’s instructions. The cultured islets were then treated with serum from subjects enrolled in a clinical trial testing the effects of a low-protein and low-calorie FMD lasting 5 days (NCT02158897). Serum samples were collected at baseline and at day 5 of the fasting mimicking diet in five subjects. We then measured IGF-1, glucose, and ketone bodies and treated human pancreatic islets with the subject-derived serum (Figure 6B and Table S1). In both healthy islets and T1D islets exposed to the serum of FMD-treated subjects, we observed a trend for glucose-dependent induction in the expression of Sox2 and Ngn3 (Figure S6A). 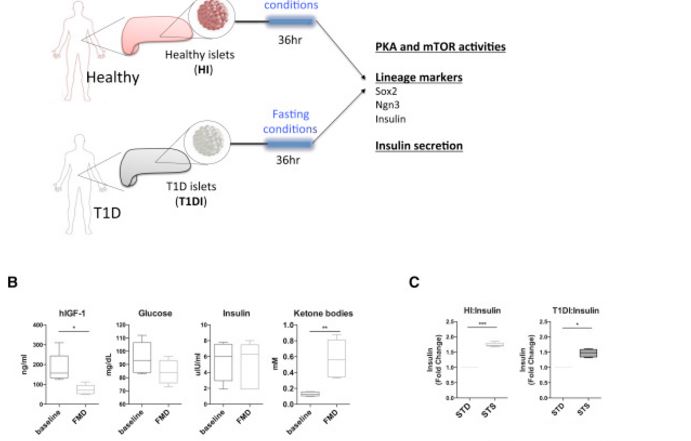 We then applied the low-glucose and low-serum fasting mimicking medium (STS) to the cultured pancreatic islets and found that it significantly stimulated the secretion of insulin in both HI and T1DI (Figure 6C). We further investigated the expression of lineage-reprogramming markers, which we found to be upregulated in mice as a result of the FMD-treatment (i.e., Nanog, Sox17, Sox2, Ngn3, and Ins). The results indicate that the fasting mimicking conditions had strong effects in inducing the expression of Sox2, Ngn3, and insulin in human pancreatic islets from healthy (healthy islets, HI) and T1D subjects (T1D islets, T1DI) (Figures 6D–6F). In cells from normal human subjects, these effects were reversed by IGF-1 treatment (Figure 6G). Notably, in human T1D cells, IGF-1 reversed the increased insulin and Sox 2 gene expression, but not that of Ngn3 expression caused by the STS medium (Figure 6G versus Figures 6D and 6E). Future studies are warranted to further investigate the role of circulating IGF-1 in the expression of lineage-reprogramming markers and pancreatic islet cells regeneration in vivo.