ROS removal by the ascorbate-glutathione-NADPH system

The Collins English dictionary defines the word “hub” as either the central part of a wheel or a focal point. Within this concept, a redox hub can be viewed as an interconnected core of reactions and components able to mediate cross talk between essential bioenergetic processes and signaling pathways. Why should such a redox hub exist? First, all life on earth is driven by reduction-oxidation reactions, in which energy is extracted from electron flow between compounds of differing electrochemical potential. Second, for cells to exist, they have had to evolve mechanisms to control redox potential spans in the soluble phase of the cell, in which biosynthetic processes occur and signals are transduced (Foyer and Noctor, 2005a, 2009). Third, plant growth occurs through developmentally plastic programs within a context of ever-changing environmental conditions that can potentially cause large swings in redox states. Cellular redox homeostasis is an essential buffering mechanism that prevents excessive reduction or oxidation. Redox signaling triggered by perturbations in this buffering system can transmit “current status” information on the balance between external inputs and internal cellular requirements.

Why should ascorbate and glutathione be part of any redox hub? Compounds able to directly oxidize ascorbate and reduced glutathione (GSH) at high rates include ROS such as superoxide or hydroxyl radical, whose probability of production is influenced by the environment. Due to their relatively high cellular concentrations, therefore, ascorbate and GSH act as scavengers or sacrificial nucleophiles. Many primary and secondary metabolites can function similarly. Ascorbate and glutathione are distinguished from most of these compounds by (1) specific enzymes that couple them to peroxide metabolism; (2) the existence of relatively stable oxidized forms; and (3) recycling of these forms to the reduced compounds by high-capacity enzyme-based systems that depend on the key electron carriers, NAD(P)H.

Both ascorbate and glutathione are abundant and stable antioxidants with appropriate redox potentials that interact with numerous components and pathways and that are maintained in a generally reduced state. In compartments where the pools are at or close to thermodynamic equilibrium with each other, and assuming an NADP(H) redox potential of −300 mV or lower, glutathione is expected to be almost completely in the reduced form, GSH (Fig. 3). Where they are present together with the enzymes monodehydroascorbate reductase and dehydroascorbate (DHA) reductase (DHAR), the reducing actions of both NAD(P)H and GSH should mean that oxidized ascorbate is present at only trace concentrations under optimal conditions (Fig. 3). Within this highly reducing intracellular context, even the most stable ROS, H2O2, has a relatively short lifetime. ROS removal by the ascorbate-glutathione-NADPH system can cause transient or sustained adjustments in all or some of the components of this system. A key theme of this review is that such adjustments have physiological significance, as they can be sensed and transduced to influence multiple signaling pathways, notably those involving phytohormones. Furthermore, even without ROS-induced changes in the system, components such as glutathione and ascorbate can provide current status redox information through proteins such as glutaredoxins (GRX) and enzymes of phytohormone synthesis. Ascorbate is an essential cofactor in several biosynthetic pathways, while glutathione acts as a sulfur source or reductant in metabolism and is also necessary for the formation of GS conjugates involved in biosynthesis, transport, and detoxification.

Interdependence and independence of glutathione and ascorbate in peroxide metabolism. The scheme is not meant to show an exhaustive inventory of all mechanisms. For further discussion, see text. ASC, Reduced ascorbate; MDHA(R), monodehydroascorbate (reductase); GST, glutathione S-transferase; ROH and ROOH, organic compound with alcohol and peroxide group, respectively.

What are ROS and how are they generated?

ROS arise from the one-electron reduction of molecular oxygen. Intracellular ROS exist primarily in three forms: superoxide anions (O2−), hydrogen peroxide (H2O2) and hydroxyl radicals (OH−). The superoxide anion contains an unpaired electron that imparts high reactivity and necessitates a rapid reduction to H2O2 by the antioxidant enzyme superoxide dismutase (SOD). H2O2can be further reduced to H2O and O2 by various cellular antioxidants. ROS can be detected intracellularly using a range of techniques; however, most assays for ROS do not discriminate between different ROS species . Although ROS were originally thought to be merely a harmful byproduct of metabolism, accumulating evidence demonstrates a role for ROS in cell fate signaling, as discussed below. H2O2 is thought to be the main ROS species involved with intracellular signaling, and in specific contexts can act directly as a second messenger, integrating environmental cues and passing them to downstream signal transduction cascades. This is due mostly to the longer half-life of H2O2 and its ability to diffuse easily through membranes relative to other types of ROS.

ROS generation and scavenging. (A) Reactive oxygen species (ROS) include superoxide (O2.−), hydrogen peroxide (H2O2) and the highly reactive hydroxyl radical (OH.) (shown in red). O2.− can be generated from complexes I and III (shown in B) or through the oxidation of NADPH by NADPH oxidases. Subsequent reduction to H2O2 is catalyzed by superoxide dismutase (SOD). H2O2 can be further reduced to water (H2O) by catalase or can spontaneously oxidize iron (Fe2+) to form the highly reactive OH.. Under conditions of oxidative stress, when ROS generation outpaces the ROS scavenging system, accumulating levels of ROS oxidize and damage various cellular components. (B) The electron transport chain complexes I-IV harness electrons from NADH in a series of redox reactions, which are coupled to pumping protons (H+) into the mitochondrial intermembrane space. The proton motive force, a combination of the membrane potential (charge) and the concentration gradient (pH), powers ATP synthase (complex V). Normally, O2 acts as the final electron acceptor at complex IV, but aberrant reduction of O2 can occur at complexes I and III (red arrows), leading to the generation of O2.−(red).

Under normal physiological conditions, the generation of ROS is tightly regulated by the ROS scavenging system. ROS scavengers are antioxidant enzymes that can neutralize ROS by directly reacting with and accepting electrons from ROS. When ROS production outpaces ROS scavenging, an excessive accumulation of ROS occurs, leading to oxidative stress and producing adverse effects on multiple cellular components, including proteins, lipids and nucleotides. To counteract this, the cell contains multiple types of antioxidants that are specific to different species of ROS, which helps to prevent pathological levels of ROS and to repair oxidative damage to cellular components. These include superoxide dismutase (SOD), catalase, peroxiredoxins (PRX), thioredoxin (TRX), glutathione peroxidase (GPX) and glutathione reductase (GR). Glutathione, a tripeptide, is one of the most abundant antioxidants synthesized by the cell. Oxidized proteins and H2O2 are reduced by glutathione through the glutaredoxin and thioredoxin system. Other key antioxidants include SOD and catalase, which reduce O2− and H2O2, respectively. The subcellular localization of antioxidants at areas of high ROS generation, such as within the mitochondria, may further enhance the efficiency of ROS scavenging.

The electron transport chain, a component of mitochondria that is responsible for mitochondrial respiration, is the main source of ROS within the cell. The primary role of the electron transport chain is to generate the proton motive force, which leads to ATP production through ATP synthase in a process known as oxidative phosphorylation (B). However, ∼0.1-0.2% of O2 consumed by mitochondria is thought to form ROS through the premature electron flow to O2, mainly through electron transport chain complexes I and III . The precise proportion of ROS generated from mitochondrial respiration can differ greatly depending on the cell type, environment and, ultimately, the activity of mitochondria. Thus, another method of cellular regulation of ROS levels is through control of mitochondrial function and the regulation of metabolic pathways. Specifically, reduced ROS levels can be achieved by diverting substrates away from oxidative phosphorylation to decrease the rate of mitochondrial respiration. In addition, ROS levels can also be minimized by diverting metabolic substrates through processes that regenerate oxidized glutathione, such as the pentose phosphate pathway. Another major source of ROS is the membrane-bound protein NADPH oxidase (NOX), which consumes NADPH to generate O2− and, subsequently, H2O2. ROS produced by NOX have been shown to act as anti-microbial molecules and also to enhance growth factor signaling. 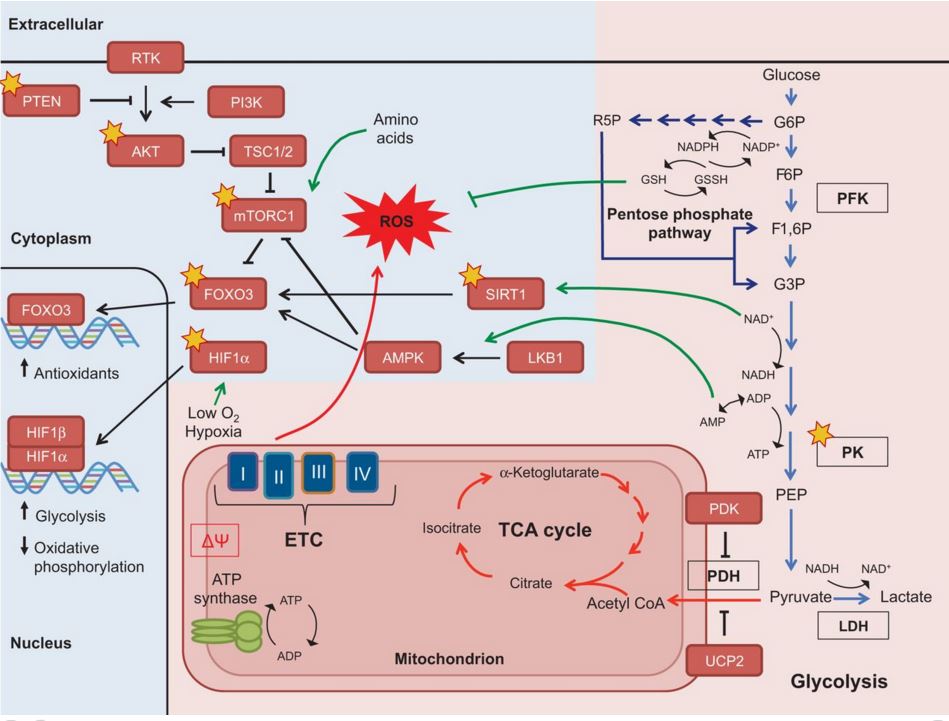 Metabolic crosstalk between key signaling pathways in stem cells via ROS and other metabolic co-factors. Glycolysis (depicted by light-blue arrows) is a catabolic process, creating energy via the conversion of glucose to pyruvate. The glycolytic intermediate glucose 6-phosphate (G6P) can also be shunted into the pentose phosphate pathway (dark-blue arrows) to produce precursors for nucleotide biosynthesis and also to regenerate NADPH, a co-factor that replenishes the reduced glutathione pools. In turn, the antioxidant glutathione (GSH) mitigates oxidative stress. The pentose phosphate pathway is especially important for the anabolic (energy consuming) demands of stem cells and for the regeneration of glutathione. Pyruvate can be catalyzed to lactate to regenerate NAD+, a required co-factor for continued flux through glycolysis and is the preferred path for stem cells. Pyruvate can also be further metabolized inside the mitochondria, beginning with the conversion to acetyl CoA, which feeds into the tricarboxylic acid cycle (TCA) cycle. The TCA cycle generates reducing co-factors that power the electron transport chain (ETC) and subsequent production of ATP, a process known as oxidative phosphorylation. Some key metabolic enzymes that are described in the text are outlined in black. The metabolic processes described can affect concentrations of mitochondrial membrane potential (ΔΨ), metabolic intermediates (acetyl CoA, α-ketoglutarate), co-factors (NADPH, NAD+, AMP/ADP) and ROS, which in turn affect the function of nutrient-sensing (depicted by green arrows) and redox-sensitive proteins (depicted by gold stars). Many of these proteins can then alter cellular processes and ultimately regulate stem cell fate. Additionally, some proteins, such as the transcription factors FOXO3 and HIF1α, can modulate the expression of metabolic genes to fit the needs of stem cells (pink background depicts the metabolic reactions and blue background indicates signaling pathways.

THE FAT-FUELED BRAIN: UNNATURAL OR ADVANTAGEOUS?

The ketogenic diet is a nutritionist’s nightmare. High in saturated fat and VERY low in