Integrity of human skin is endangered by exposure to UV irradiation and chemical stressors, which can provoke a toxic production of reactive oxygen species (ROS) and oxidative damage. Since oxidation of proteins and metabolites occurs virtually instantaneously, immediate cellular countermeasures are pivotal to mitigate the negative implications of acute oxidative stress. We investigated the short-term metabolic response in human skin fibroblasts and keratinocytes to H2O2 and UV exposure. In time-resolved metabolomics experiments, we observed that within seconds after stress induction, glucose catabolism is routed to the oxidative pentose phosphate pathway (PPP) and nucleotide synthesis independent of previously postulated blocks in glycolysis (i.e., of GAPDH or PKM2). Through ultra-short 13C labeling experiments, we provide evidence for multiple cycling of carbon backbones in the oxidative PPP, potentially maximizing NADPH reduction. The identified metabolic rerouting in oxidative and non-oxidative PPP has important physiological roles in stabilization of the redox balance and ROS clearance. 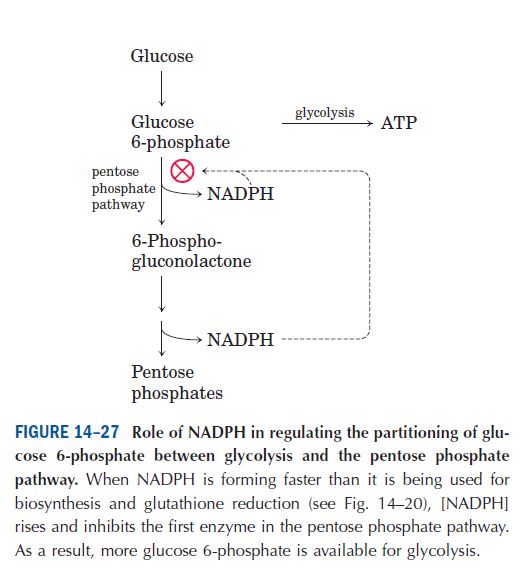 Entry of glucose 6-phosphate either into glycolysis or into the pentose phosphate pathway is largely determined by the relative concentrations of NADP and NADPH.

The maintenance of the entire antioxidative system relies on sufficient NADPH production, as it is the principal cellular reductant. For example, NADPH is a critical cofactor for catalase in that it maintains the enzyme in an active state (12, 25, 26). Also, NADPH serves as a cofactor for glutathione reductase to which it catalyzes oxidized glutathione to its reduced form (GSH), a major free radical scavenger (Fig. 1). As major source of NADPH, the role of G6PD as antioxidant enzyme has been recently well elaborated. For example, G6PD-null cells were reported to be exquisitely sensitive to oxidative stress (36). In addition, overexpression of G6PD helps to prevent oxidative stress-mediated apoptosis (30). It is notable that our previous data, as well data from others, suggested that G6PD was inhibited by high glucose significantly in cultured endothelial cells (1, 49). Data from the present study also showed that G6PD activity was significantly inhibited in the kidney cortices of the diabetic animals. It certainly is of interest to know whether the glucose-induced decrease in G6PD activity is observed in glomeruli, tubules, or both. Experiments in which the cortices were separated into glomerular and tubular fractions showed that both glomeruli and tubules displayed decreased G6PD activity in diabetic animals compared with NDM controls (data not shown). This observation is consistent with previously published data in which decreased G6PD activity has also been observed in liver (33), aorta (43), heart (27, 42), and Leydig cells (5) from diabetic animal models. Moreover, it has been reported that patients with diabetes have decreased G6PD levels in liver (6), mononuclear leukocytes (34, 44), and erythrocytes (9, 10). Our data, along with many others (13, 35, 47), strongly suggest that decreased G6PD activity is of significance in the pathogenesis of diabetic complications.